When asked about his current challenges as an artist, Hutter replied, “Still the same as most of my life: painting a good oil picture.”

Besides being enormously creative and thorough in what he does, discipline and simplicity are two of Micheal Hutter’s other strong points. Born on December 26, 1963, Hutter is a German painter, graphic artist, and writer. From 1983 to 1986 he studied free painting at the Cologne University of Applied Sciences. From that period, Hutter has been exhibiting in numerous art galleries both in Germany and abroad. In his abysmal, detailed works, he focuses on eroticism, religion and the cosmic horror. His passion and commitment for art resulted in remarkable surreal and magical pieces. 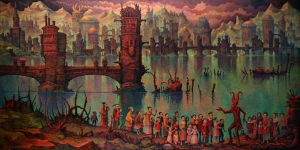 Besides his exhibitions, Hutter also worked on illustrations for fantasy books, music albums and other media. A unique characteristic of Hutter creative process is the idea of following the logic of dreams, which Hutter considers to be an unconscious process. Relying on fantasy, science fiction, and surrealism Hutter has created numerous works including his famous story cycle Melchior Grün: Fünf Moritaten (Melchior Green: Five Moritaten), Games in Purgatory: compiled of paintings, a book, and a short film; and the Carcosa cycle.

Using traditional techniques like oil, tempera, and watercolour to create his works of art, Hutter also uses dipping pens for his ink drawings and etching for his graphic works. Most of his oil paintings are done in a precise three-layer technique, except the Carcosa cycle which was painted in one layer. Hutter is currently working on creating a series of illustrated short stories called The very amazing cosmic Puppet Theatre. 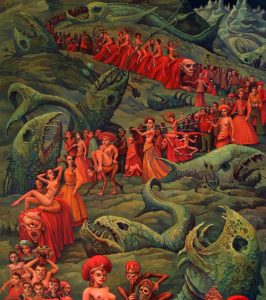 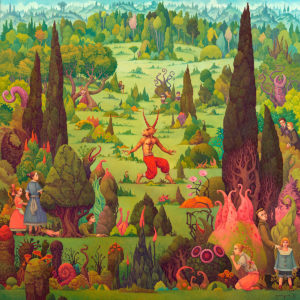 Do you remember your first interaction with art? When did you decide you wanted to follow your passion for art?

In my childhood, I started to experiment with religious madness under the influence of a stern old school director. But at the age of thirteen, a little book on surrealism hit me like an epiphany. That was even better than religion. I decided to become an artist instead of a religious fanatic. I still think this was a good choice. 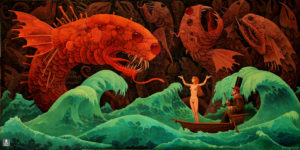 You studied free painting at the Cologne University of Applied Science. What were some of the influential courses you took, and how did your academic experience shape you as an artist?

I must admit that only the nude studies were of interest. 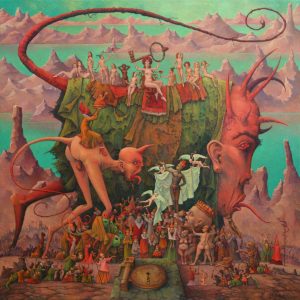 What feelings, subjects or concepts inspire you?

I developed a technique by dealing with literature, art, music, philosophy, science, religion and pseudo-science afar from mainstream culture. I don’t care about reality or the probability that something is true, only for its potential to stimulate my imagination. In my opinion, the truth is somehow an illusion anyway. I mix that with my obsession, passions, desires, and fears and choke what happens in the abyss of my personality back to the surface. In the last step, I try to bring down what I found on paper or board or canvas. 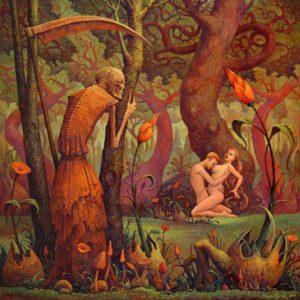 What kind of creative patterns, routines or rituals do you have?

I’m very disciplined and simply work nearly every day from morning until night.

What are currently your main challenges as an artist?

Still the same as most of my life: painting a good oil picture. 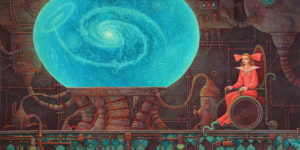 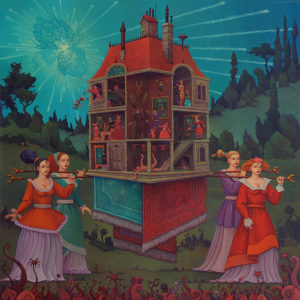 Can you share with us one of your favourite stories that are part of The Kranzedan Tales?

The idea of The Kranzedan Tales only becomes clear if you read them connected. So I share three stories with you.

Once, whilst at a fair, the Kranzedan witnessed the astounding performance of a jester of great renown, whose name was known both near and far. It was said that no one had ever fathomed nor revealed any of his outlandish tricks. The Kranzedan stood, mouth hanging open, as he admired the conjuror’s mind boggling deceits, and when the performance had ended, and the magician’s droll little monkey was making his rounds, hat in hand, he went over to the artist and begged him to take him on as his apprentice. The magician studied the Kranzedan for a long time and then he finally agreed. The Kranzedan was observed the next day as he was leaving the town among the colorful cavalcade of fairground people, but after that, his trail went cold and no one has ever seen him again.

On another occasion, the Kranzedan and his wife retired to bed in the evening. In the darkest hour of the night, he suddenly awoke, and there, between him and his spouse, a stranger laid, a bearded man of unfathomable malice.
When morning came, the wife lay alone in bed, the Kranzedan was gone, and the wife never received tidings of him again.

Once, as the Kranzedan was visiting a gallery, the following mishap befell him: Absorbed in the contemplation of art, he failed to pay attention to the time and was locked in the museum overnight, having been overlooked by the staff due to his inconspicuousness. Desperately looking for the exit, he wandered through the endless corridors, stairwells, and rooms of the August exhibition. In his predicament he ignored several signs saying “Staff Only,” “Do Not Trespass!” or “No Entry!” and found himself at last in a room which was devoted to the works of a Renaissance painter of whom he had never heard.

The Kranzedan gasped when he looked at the paintings because everything else exhibited in the museum, yes, ultimately everything that he had ever seen of art, paled into insignificance in the face of the power of the works and the virtuosity of their creator.

But as much as these pictures delighted his aesthetic sensibilities—the longer he studied them, the darker his heart grew, for the old master had exposed the cosmic idiocy and absurdity at the very heart of creation. He had painted with such lucidity and persuasiveness that anyone who looked up his works would lose all hope and would despair.

So engrossed was the Kranzedan that the dusty attendant, lurking spider-like in a shadowy corner, had completely escaped his attention. However, he had noticed the Kranzedan and had crept silently to the large double doors at the entrance to the room and firmly locked them.

And thus the secret of the ostracized painter was preserved because the Kranzedan has never been able to leave that room and tell the world about the paintings which are concealed therein.

What advice do you have for aspiring artists?