The Amsterdam-based festival organisation DGTL will return to Barcelona for its fourth edition, happening from 10th to 11th of August, 2018.

The DGTL hosts a variety of events across the globe and many prominent names are featured in the initial lineup for this year’s edition in Barcelona. “Like previous years, DGTL will curate a line-up of cutting-edge electronic music, conceptual art performances & installations. All with a strong focus on innovation and sustainability.” The lineup includes Carl Craig & Cassy, KiNK, Maceo Plex, Oscar Mulero, Rødhåd, Antal & Palms Trax, Ben UFO & Job Jobse, Fjaak, Nightmares On Wax, Peggy Gou, Speedy J, among many other performing acts. The rest of the programme and more news relating the festival will be announced in the near future. 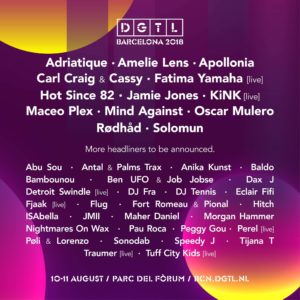