Allow us to start with a rhetorical question. Have you ever tried working on an illustration for approximately 100 hours? On the same one? Well, probably most of the illustrators out there don’t have such patience.

Rafael Araujo, is an architect and illustrator born in Caracas, Venezuela in 1957. We are delighted that we had the chance to take a bit of Araujo’s time for an interview regarding his amazingly detailed work.

Inspired by mathematics, Araujo uses geometry, trigonometry and dot sequence to create his illustrations which resemble us a bit with Da Vinci’s sketches. Rafael Araujo’s devotion to making his drawings, result in complex pieces which may seem as if they are computer-made. On the contrary, he draws everything by hand—only using a lamp for light, a ruler, compass and protractor. In Araujo’s drawings, there is no space for error, as he described “Working by hand, with ink on canvas, my main concern is to be aware of what I’m always doing. Errors are paid dearly.” 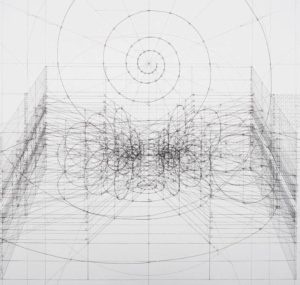 One of his early inspirations was the work of M.C. Escher, which incorporated Rafael’s interests in perspective, angles and three-dimensional objects. The beauty of lines and dots and his patience combined with creativity and mathematical concepts opened the path for Rafael to start drawing at a very young age.

“I’m quite happy just working daily and hope to be able to do this till the last day.”

As a kid, Rafael noticed the intelligent patterns in the world of nature such as spiral, sequences and proportions, and learned the concept of Golden Ratio—a concept which later inspired Araujo to develop his Golden Ratio Coloring Book. When asked about what is he trying to communicate with his art, Araujo implied: “That ‘perfection’ even being a platonic idea, could be an attainable goal.” 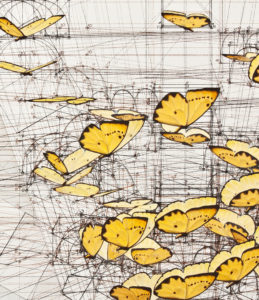 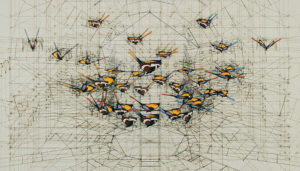 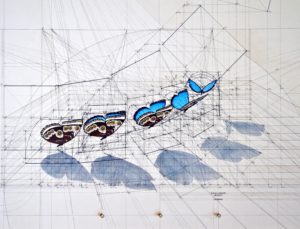 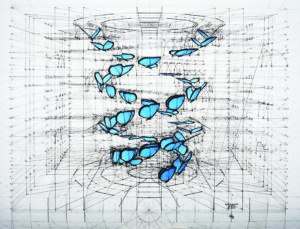 Rafael has been drawing his perspective illustrations, at first illustrating dots, lines, spirals, helixes, cones, and later adding ink-drawing and acrylic painted butterflies such as Blue Morpho Double Helix, shells inspired by Fibonacci sequence, and insects on top of the precisely illustrated forms.

Besides his calculation drawings, Araujo crafts beautiful landscapes, an inspiration he finds from Los Roques Archipelago and Tepui table-top mountains, some of the natural beauties of Venezuela, his beloved country. We asked Araujo how does he approach these two different styles, and he explained that he simply uses his other “mind.”

“I suppose we all have different minds within our single head. However, I do use two of those multiple minds when doing one work or the other.”