When he isn’t teaching at San Francisco State University in California, Ben Ridgway is a 3D artist, who has been influencing graphic design in film, animation, and video games for quite a while. Coming from an older generation of artists, Ben makes his signature 3D animations and films for which he is recognised worldwide.

The inspiration behind his projects are themes involving infinity, the golden (Phi) ratio, sacred geometry, fractals and other metaphysical and multi-dimensional features of reality, which are represented in his short films such as Stillpoint and Inner Space Artifacts. 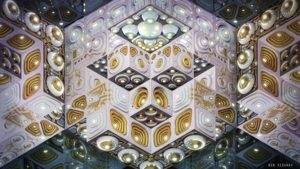 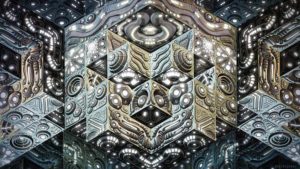 “My abstract animations investigate the metaphysical features of reality. They are designed to stimulate archetypal associations and invite the viewer to make personal connections to the visual and auditory experience without any reliance on narrative or spoken language.”

The animations and films that Ben makes invoke similar feelings to sacred geometry in architecture. His work resembles many dome paintings and iconographies within Cathedrals, Mosque’s and other religious places, which are part of an old tradition of artwork inspired by divine or sacred proportions. These patterns and forms have been discovered everywhere in nature and are quite prevalent in mechanics. 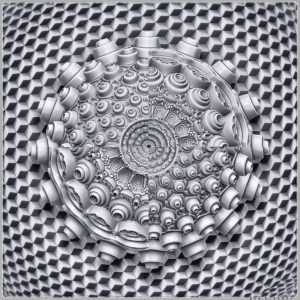 By adding his spin and avant-garde approach to all of his projects, as well as inserting infinitely recurring patterns, Ridgway finds innovative ways to use programs, ways which were not necessarily intended by the developers.

Besides using software and computers to make his drawings, Ben also uses traditional media to draw and eventually translate them digitally. His diverse range of form and structure allows him to arrange complex drawings in different ways without overusing any pattern or design. Over the years, Ben has worked with producing companies such as Nintendo, Sony, and Microsoft. In addition to his mesmerising work, we did a short interview with Ben Ridgway to know more about his art, influences, and future work. 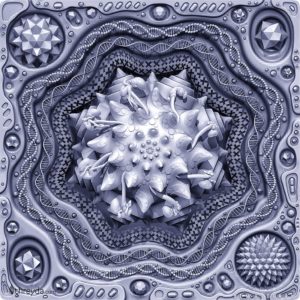 Do you remember your first interaction with art? When did you decide you wanted to become an artist?

My first memorable interaction with art was when I was 9. My family had decided to go on a vacation at a bed and breakfast inn by Lake Michigan while on the way to my dad’s high school reunion. The inn had an old library chocked full of art books. Among the books, a Salvador Dali book caught my eye. As a highly imaginative nine year old I felt like I was seeing someone’s imagination taking physical form. When we returned from the trip, I told my art teacher that I wanted her to teach me how to paint like Salvador Dali. Needless to say, she was tickled by my request and helped me make an earnest attempt at doing a surrealist painting in tempera.

I decided to become an artist during my first year of college. Initially, I had signed up to be a business major because my parents had me convinced that I would end up a “starving artist” if I pursued art. From the get-go, I was very unhappy in a university setting. Over the Thanksgiving break, a friend of mine gave me some psilocybin mushrooms.

When I took them, I had what I thought was a “bad trip.” After sorting out the whole experience, I saw that it wasn’t “bad” but rather I had received some stern messages coming from my innermost self about my life purpose. I was shown that I am in fact an artist at heart and that if I did not pursue my true passion, I would be regretful (or worse) throughout most of my adult life. After the first semester, I knew I needed to switch to art. So I did and started attending art school the following year.

What is the main inspiration behind your art?

I’m fascinated with the mind and how it manifests abstract and spontaneous works of art through guiding the body into action. I don’t have a main inspiration, but I would say that the art and artists that I surround myself with are quite inspiring. I’m also a tech lover and find a lot of inspiration through experimenting with emerging technologies that intertwine with newly emerging art forms. 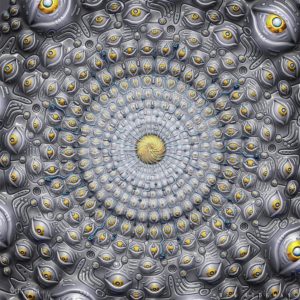 What inspires you to embark upon a specific project?

Real inspiration is like fire in the belly. Usually, I’m already heading down a particular learning path (sculpture, VR, animated films, etc.) when I get inspired. Looking at art, going to new places, and in general having new experiences often bring about inspiration. Staying in a routine and doing what is comfortable almost never yields inspiring thoughts and ideas.

Can you tell us about the process of making your work?

I do a lot of 3D work. I usually start with a 3D package like ZBrush and begin by sculpting and building basic forms. Then I refine those forms, render them, and then play with them in Photoshop. For my animations, I use unconventional methods for making motion in ZBrush and then composite everything in Adobe After Effects.

Here’s an example of my animation process:

What are you working on at the moment? Are you considering to explore something new in your works?