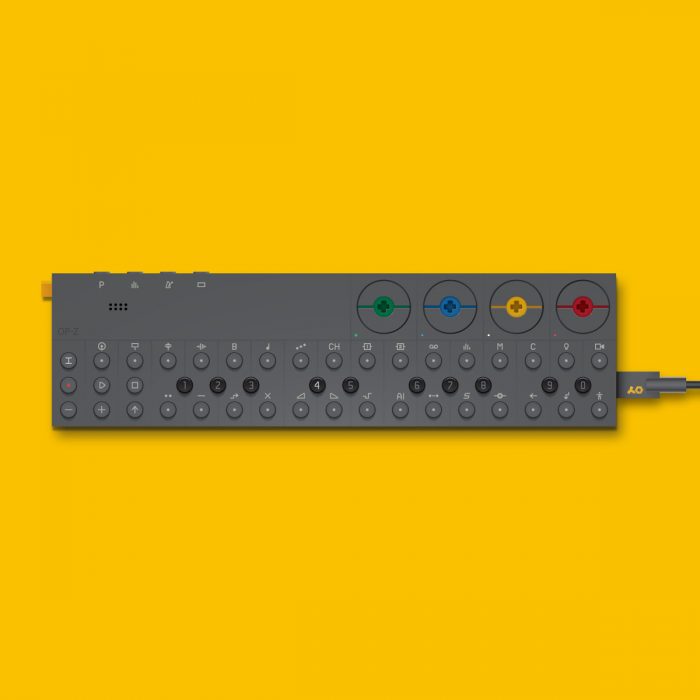 The Swedish design studio Teenage Engineering has steadily grown its cult following in the 13 years since its founding. Its unique take on music creation tools likely stem from its diverse roots: its founders hail from varied realms, such as fellow boutique synth maker Elektron; fashion brand Acne Jeans; and the video game studio DICE.

This has resulted in tools that diverge from the expected, starting with the OP-1, which squeezed a remarkable diversity of music creation ideas into a playful, portable, all-in-one synthesizer, and continued with a series of Pocket Operators—tiny, battery-powered synthesizers, drum machines, and samplers that pack a rather remarkable punch into a tiny and affordable combination of raw circuit board, simple LCD screen, and a handful of buttons and knobs.

The OP-Z feels, in many ways, like a merging of various ideas developed with these products, folded together into something that’s uniquely its own. The OP-Z takes the portability of the Pocket Operators—it’s truly small and streamlined enough to carry with you at all times—with the focus and flexibility of the OP-Z. It brings TE’s knack for minimalist, intuitive design and UI to an all-in-one device that’s much more focused on sequencing than any of its forebears; among other things, the OP-Z excels at creating the right number of constraints for fostering creativity, along with the kinds of kinetic interactions that facilitate intuitive play and happy accidents.

The real star here is sequencing: tracks can run at various speeds, lengths and loop points, and applying controlled randomness is easy and fun. Step components add an extra layer of instruction per step—ratchets, random note changes, ramps, and the like—and the integration here is some of the best around, building even upon Elektron’s mighty legacy in this area. Programmable punch-in effects, which will be familiar to Pocket Operator owners, make their return, and the OP-Z also lets you automatically transpose entire sequences into different scales, across six octaves, which is a great way to re-sequence recorded compositions.

There are brilliant, small touches that permeate both the OP-Z hardware and software, not the least of which is its approach to encoders. Rather than using standard knobs, sliders, or touch strips, the OP-Z uses flat rotary encoders. While at first glance they might appear challenging to use, in practice they feel like a legitimate improvement; not only do they allow you to transport your OP-Z without fear of a knob breaking off, they also allow for endless travel, without having to reset your hand position in order to keep scrolling. And should you so desire, they’ve been designed to slot in physical knobs that use standard Lego connectors.

There’s no display on the OP-Z; it’s been designed for standalone use, using a series of button combos and multicolor LED lights, its interactions don’t require a screen. The OP-Z pairs with an iPhone/iPad app; this lets you see what the different button and encoders do, and is particularly useful in helping users learn the different UI concepts and command layers. After several hours of use, the device becomes rather intuitive on its own and frees up the iOS display for something far more exciting: visual sequencing.

TE describes their new instrument as a “multimedia synthesizer and sequencer,” and the description is apt: using the iOS app, users are able to live-sequence visual compositions along with their music and beam them wirelessly to an Apple TV (or any other screen using an HDMI adapter) for live performance. While creating custom graphical patches requires some knowledge of video game development software Unity, it’s already fun to play around with the scenes that ship with the device. Programming animations, color changes and camera movements on-the-fly is as intuitive as note sequencing on the OP-Z, and more “visual packs” from artists are in the pipeline. The OP-Z also has a dedicated track for controlling up to 16 stage lights via the DMX protocol, as well as a “Photomatic” feature that enables you to sequence photos taken on your phone.

While the visual tools feel like they’re still a bit work-in-progress—the Unity integration is available on Github, for those with the Unity knowledge to engage with it—the building blocks feel like they’re in place for something even more intuitive; it will be exciting to see if TE can create the same intuitive playground for graphics and animation as it has for music creation.

To add to the videogame metaphor, TE has included a cartridge slot on the OP-Z as well: twist off the four pads on the bottom of the device and remove the bottom panel, you’ll find a slot designed for custom modules. The first of the cartridges—an I/O which reportedly includes support for MIDI and CV/Gate to interface with modular gear—will bring a host of connectivity options to the device, and we’re hoping to see a large ecosystem of (potentially custom-made, 3D-printed) modules that extend the device’s capabilities even further. The OP-Z can send MIDI over USB and can be controlled with other MIDI devices by functioning as a MIDI/USB host.

The OP-Z comes it at $599, which is more than Teenage Engineering had originally hoped for. Despite the lack of screen, the OP-Z’s battery doesn’t last as long as that of the OP-1; its synth engines are relatively limited (with only a single LFO and envelope per track); and programming longer sequences isn’t entirely intuitive (currently, the only way to do this requires reducing the step divisions). Manual pitch-bending, which employs a pressure-sensitive pad on the bottom of the device, is a bit tricky, and the Motion track doesn’t yet support step components.

But if the OP-1 is anything to go by, there should be plenty of additions and improvements over the coming months and years; it’s still early days, and it will be exciting to see how Teenage Engineering’s tiny device develops into its own functioning ecosystem. As it is, it’s bursting with ideas and creative inspiration, and interesting musical ideas somehow seem to develop with every session spent using it. In some ways, it feels a bit like the music world’s Nintendo Switch, in the way it reduces so much of the friction involved in making music: just turn it on and go, and bring it along with you wherever you’re headed.