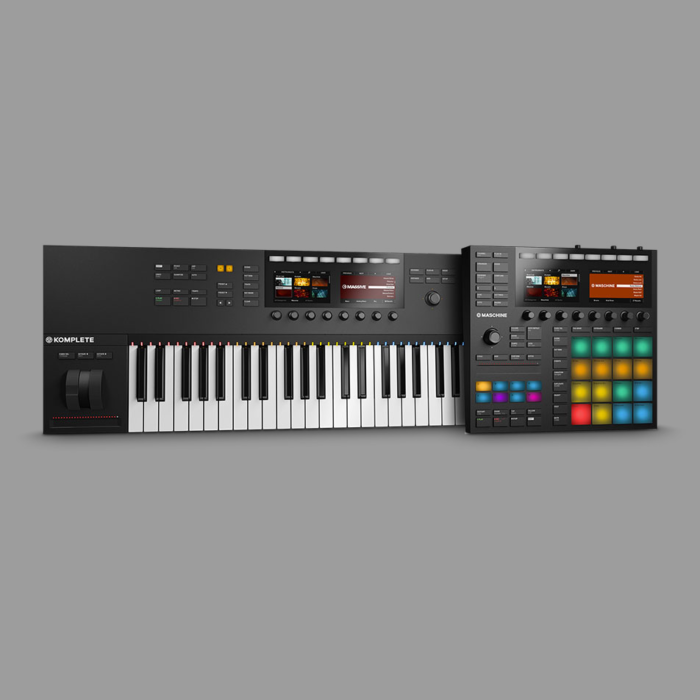 Like the larger Studio model, the Maschine MK3 includes two high-resolution screens, and borrowing from the Maschine Jam, also incorporates a touch strip for controlling everything from pitch and modulation to effects and even notes. The layout has been refined, with dedicated buttons for play modes (Pad / Keyboard / Chord / Step), as well as a handy Macro button. Navigating menus is the easiest it’s ever been (a good thing, as this is something you’ll generally be doing a fair amount of when using Maschine), and the pads feel great and responsive across their entire surface.

Perhaps most surprising feature of the Maschine MK3 is its built-in, bus-powered audio interface, which lets you record sound directly into the line inputs (and straight into the Maschine software), and output to your monitors and headphones (though not simultaneously, for some bizarre reason). Also handy is the “Lock” function, which lets you save and transition between snapshots of your current parameter settings. It’s possible to save up to 64 of these “lock states” per project, which you can then snap or morph between. It’s a great improvement to the workflow, opening up new avenues for experimentation without risking losing your current progress. (Videogames could learn something from the idea.)

In terms of hardware, Native Instruments’ new Komplete Kontrol MK2 is more of an incremental upgrade. It brings a similar dual screen approach as the new Maschine, and replaces the pitch and mod touch strip with nice snappy, analog wheels (a touch strip for modulation still exists, but it’s smartly placed beneath the wheels). There’s also the same new push encoder from the Maschine MK3, which can be turned or used like a joystick for directional buttons. The Light Guide is back, with brighter LEDs than in the previous model.

The MK2 better integrates with both NI’s own Maschine software, as well as third-party DAWs. Ableton Live, Logic and GarageBand are all supported via the keyboard’s dual screens, which let you do things like hit the Mixer button to bring up a graphical representation of your DAW’s mixer tracks, which can then be controlled with the knobs underneath. You can scrub through your track or even trigger scenes with the push encoder, and the Auto button lets you record automation in supported DAWs. It’s no Ableton Push in terms of integration, but if you’re a heavy NI plugin user and want a proper keyboard to play them, you’re not going to do much better than this.