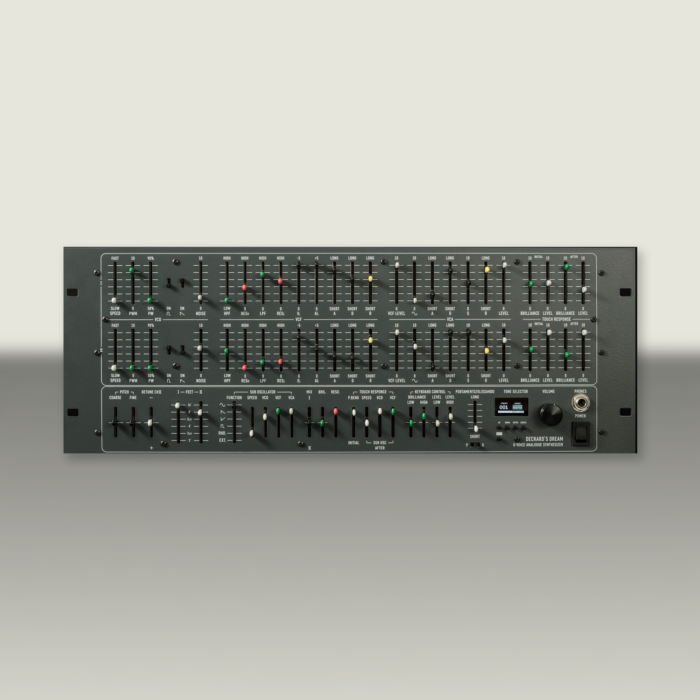 An unabashed homage to the music and sound design of the original Blade Runner, Deckard’s Dream may represent the first time a synthesizer has been released alongside a major motion picture sequel. The work of Sputnik Modular’s Roman Filippov, it’s an absolute beast of a machine: an 8-voice polyphonic analogue synthesizer with some 70 slider controls, inspired by the sounds of Vangelis and the seminal Yamaha CS-80. Fortunately, this slice of retro-futurism comes with enough modern amenities to keep it far from anachronistic territory.

The machine’s 16 voltage-controlled oscillators provide eight-voice polyphony, with two independent synthesizer layers per voice, as well as discrete waveshapers which help to reproduce the quirkiness of the original waveforms. Autotune keeps all 16 VCOs tracking perfectly—along with detune settings to get things sounding weird.

What’s particularly interesting is the machine’s embrace of polyphonic aftertouch and MPE. MPE technology means that, using controllers like ROLI’s Seaboard keyboards, Roger Linn’s LinnStrument and others, the expressiveness of control should be second to none—complete with poly pitch bend. Likewise, the unit has both MIDI and USB connections, as well as a VST/AU editor, shipping with 256 presets and a software editor provided by Spektro Audio, browsable via a 128×64 OLED display.

Deckard’s Dream is available in both pre-built and DIY versions, with all digital SMT parts preinstalled for the latter. According to the manufacturer, a detailed building manual, large thru-hole components and a simple calibration procedure will allow even beginners to build the kit, which is available for $999 (additional components are required as well, so be sure to check out the site for details). The pre-built version is also shipping now for $3749, and Filippov is planning a 1U rackmount expander, with 16 assignable CV inputs, analogue ring-modulator and chorus, and more.