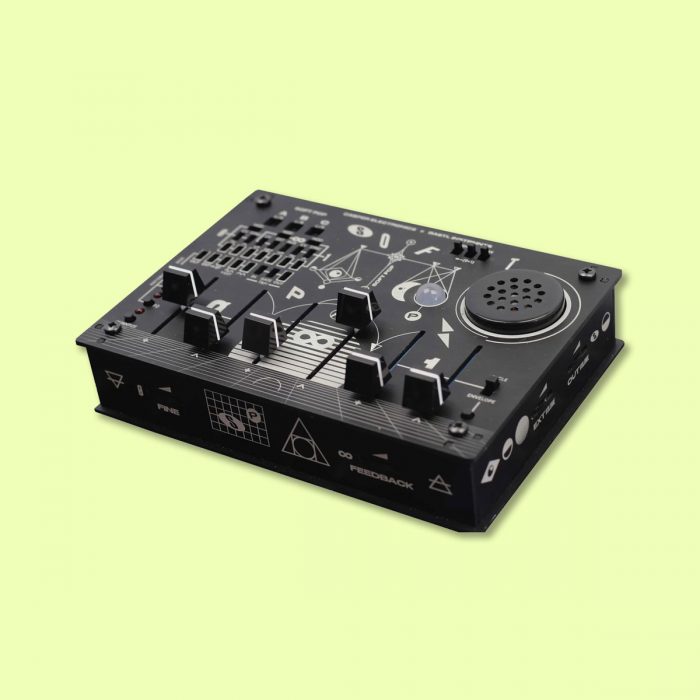 If you haven’t watched YouTube streamer Cuckoo’s documentary on Bastl Instruments, it’s highly recommended that you do so. It’s an authentic, intimate look behind the scenes of one of the freshest music hardware manufacturers out there, and a nice document of the DIY energy that fuels this Czech operation. One of the most engaging moments of the documentary comes when Cuckoo stops by the workspace of Bastl’s Pete Edwards (also known as Casper Electronics), and gets a peek at his then still-in-development creation, dubbed the softPop.

softPop is a tiny, portable synthesizer with an even tinier patch bay and the ability to run on batteries, housed inside a sturdy aluminium enclosure. Six faders occupy most of the front panel, along with a speaker, a handful of tiny buttons and switches, and a miniature LED dome, alongside that aforementioned tiny patch bay. The idiosyncratic, black-and-white designs that fill out the front panel further set the tone for what is clearly a deeply personal creation; the softPop feels like the fully-realised vision of its creator, in a way that’s rare (if not impossible) for gear produced by traditional music tech companies.

Accordingly, the sound character of the softPop is unique and specific—one of a bubbling, gurgling, organic machine, which can emit sounds and patterns that range from rapid laser fire to croaky, sporadic frog talk. Technically, softPop is a two-oscillator subtractive synth; each oscillator has a fader for pitch and another for modulation. The first VCO has a quantizer that converts its continuous pitch range to a stepped, chromatically-tuned scale, as well as a rather tricky pattern generator that records and loops the movements of the VCO’s faders. The first VCO can be switched from continuous cycling to a one-shot mode via a (very small) button, and the modulation sources for each can be set via the patch bay. There’s also a useful fine-tune thumbwheel with a range of five semitones.

The softPop’s multimode filter is where much of its magic happens. One fader controls cutoff, switching from high- to low-pass as it moves across the middle, while the second fader controls modulation, which is normalised to a mix of the first VCO’s square output and the second’s triangle wave (but can also be patched to other sources). Below the front panel is a small thumbwheel that controls the resonance, one of the key contributors to its incredibly satisfying, bubbling feedback. Even just as an effects processor and filter for external sources, it’s a wickedly powerful beast.

It also plays nicely with other gear: Along the top edge of the device are three stereo minijack sockets, labelled A, B and C, which can be used to bring external control voltage in from other gear, or send audio and/or control voltages out to other sources. There’s even a “Secret Chamber” hidden on the bottom of the machine, which is accessed via a sliding wooden door; the bank of six switches break softPop’s normalisation routings, and there’s even access to the pattern generator’s micro-controller, for those who want to take a crack at reprogramming it.

Despite its small size and seemingly simple controls, there’s tons to explore with the softPop; while the labelling is esoteric, it comes with a rather comprehensive manual that breaks things down clearly (even the Secret Chamber), and provides a number of great example patches. The combination of its small size and battery/USB power options make it perhaps the most portable synth outside of Teenage Engineering’s Pocket Operator line, and the built-in speaker and reactive, multicolour LED orb only add to the fun. This tiny box sounds amazing, and brings with it a peculiar, wet gurgling sound that’s full of activity and texture.