Ian McDonnell AKA Eomac, also known as one half of electronic duo Lakker, is an artist, composer, producer, label owner and DJ based in Dublin, Ireland. He has released genre-spanning music via The Trilogy Tapes, Stroboscopic Artefacts, Bedouin Records, Killekill and recently launched his own Eotrax imprint. He is also one half of duo noeverything with producer and vocalist Laura Kilty (aka LAIR) and a number of other collaborations yet to see the light of day.

All of this activity has garnered support and attention from far afield, and Eomac can count the likes of Thom Yorke (who included a number of Eomac tracks in his Moon Shaped Pool release playlists), Surgeon, Nina Kraviz, and Aphex Twin among his many fans.

His Bedouin Trax LP in 2016 drew inspiration from obscure Middle Eastern music, digging deep into a dark mysticism for the dancefloor. Bedouin Trax part two is already in progress, and he has just released his new solo album Reconnect on Eotrax, in which he continues his exploration of the furthest reaches of physical, visceral music for body and soul. “Drawing influence from traditional Irish music, Haitian voodoo drumming, the raw old-school jungle of Source Direct and the abstract rhythms of Autechre, Eomac has crafted a dense, multi-layered and polyrhythmic exploration of percussion, texture and movement.”

To get to know more about the process of the album, Sergey Naumchik spoke with Ian McDonnell to learn more about his latest creation, Reconnect.

It’s no secret that the motifs of folk music play an important role in your arts. The new album Reconnect is the call to pay attention to the roots? Or on the contrary, the manifesto to create a new musical culture, new roots?

Eomac: It’s about reconnecting on a lot of levels, not just musical—reconnecting to nature, to the truth, to balance, to wildness, to spirit and spirituality. The idea of roots is interesting because there was also the sense of reconnecting to roots in the album for sure—reconnecting to my Irish roots. But with the intention of learning from that, and understanding it so I can move forward and create my own story from this point on. The idea of reconnecting to roots too, as you say, create new cultures, new ways of being. I’m not someone who wants to hold to tradition but we can learn from traditions and figure out what’s important to humanity and what is not. To figure out ways that might be more sustainable and nourishing for humankind as we progress.

In other words, you wanted to say that you can find harmony through the long path from the past to our days, reconnecting and collecting essential things inside your mind and soul. Do you think this formula works for all the people? Or no? There are many cultural and religious differences between nations.

E: I think all people are more similar than they are different. There are cultural and religious differences of course, but those differences are only in the details. People are essentially the same the world over. We all need the same things—love, connection, food, water, safety. I think in looking into traditions—folk music for example—you see those similarities and those very deep connections. Folk music from Ireland is very similar to folk music from Asia or Africa or Russia. Similar in its intention of expressing the everyday life of the people, and even similar in instrumentation and sometimes melodic and rhythmic motifs. The same goes for spiritual music.

Art and music are like a guide, and for me much more real than politics or religion in figuring out and pointing towards truth. The connections between all cultures through their art lead to a deep truth about humanity and the deep connections we all share. What I’m talking about in my album is not a formula, as you say above; it is more of a search. A search for these connections, a search for truth and shared humanity, and in particular in finding that both through connecting to our bodies and our spirit. And dance is a good way to do that!

It turns out that this album is more existential than social, it emphasises the person and his inner.

E: I hope that it’s both, as the music is rhythmical and the intention is also to move the body. And dancing can be social and introverted.

As with any art. 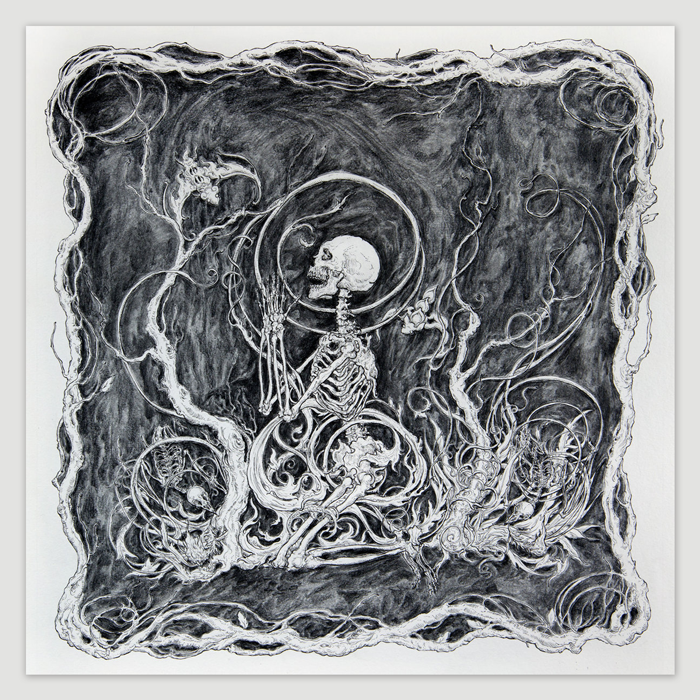 By the way, the cover of the vinyl looks amazing. Skeleton embraced by the roots!

E: The amazing artwork is done by Jazz Szu-Ying Chen.

This was a collaboration that we did together specifically for the album. We were mutual fans, and we met up after one of my shows and chatted about a potential collaboration. That was just when I was finishing up the album, and it became clear very quickly that her work would really suit the kind of things I was exploring on this album. I am so happy with it. Jazz’s work uses a lot of motifs from different traditions and cultures, and it deals (for me anyway) with topics like light and dark, life and death, so it really resonated with me and where I was at while making the album. The skeleton, the body, the roots, the nature… It is all there!

Back to music, you put the drums in a special place. Why exactly this tool?

E: Hmmm, good question [laughs]! I have always loved rhythm and music has always made me want to move my body. There is something primal in it. And in the context of this album, it made sense to really push that idea. Primal, physical energy, wildness. Rhythm lends itself well to expressing those things.

In this case, it is the echoes of Irish culture that appear in Reconnect? Because we heard eastern motifs in your previous album, Bedouin Trax.

E: I think so. That was certainly my intention. I don’t think the rhythmical motifs of Irish music are so obvious in the album, but I have sampled the bodhrán (an Irish handheld drum) quite extensively, and I think the resonance of this is maintained. And certainly, the Irish wildness and ancient Irish folklore and mythology were definitely something I was trying to tap into. The energy of wild nature that you can feel all around you in Ireland. It was definitely something I wanted to do after the Bedouin album—explore my own cultural traditions and instruments.

This is the thing you were inspired by? This wild force and wisdom?

E: Yes! Wildness and wisdom are two things I am searching for in life. I think there is great and inherent wisdom in the wildness of nature. It’s a great teacher and a source of constant inspiration.

Well, was the work on this album easy? To return to your native area? Or was it an exhausted, difficult album?

E: Good question! It was quite easy I would say, it was what I wanted to explore and express at that moment in time. So it felt “right” and natural for me to do so. Both in terms of the music—I really wanted to push myself rhythmically—and personally with all the thematic material. It flowed quite naturally. It was also refreshing to just do what I wanted without considering outside forces, for example, considering how it would work on a dancefloor, or who would release it, or who would even listen to it. I just wrote what I wanted, and it felt great!

Good, because sometimes listening to the tracks, for example, “Transmutation, Redemption, Forgiveness,” it seems rather nervous.

E: [laughs] That was quite therapeutic to do. Just to scream and scream.

Is that your vocal in the tracks?

E: Yes! It’s me in all the vocals in the album. It wasn’t totally easy to record all those vocals, but it wasn’t really difficult either. I just committed to it, and it felt great. The world would be a healthier place if adults had more opportunities to scream out all their pain and frustration the way children do.

So, here we opened a social moment in the album.

Recently, you had the premiere of your album in the 4D sound. Please tell more about this show.

E: That was a really interesting process. When they approached me to do some work there, I immediately thought of reworking the album. For anyone who doesn’t know, 4D is a system of 57 speakers (9 subs under the floor and 48 tops above the ground) situated in the Monom room at Funkhaus, Berlin. But I think (as far as I’m aware) that the original 4D system is in Budapest. A big spatial array. So I thought that the polyrhythms in the album would sound great in a space like this, different polyrhythms overlapping in space. So I set about recomposing the entire thing for the space, and it worked really well, I was happy with the results. Most of “spatial” music that I have heard in the past has been quite ambient or textural, so I really wanted to do something rhythmical, and it worked well!

How would you describe the style of your music now? After listening to Reconnect, I would say that I heard an electronic grunge. The same freedom and impartiality are felt by the skin.

E: Electronic grunge, wow! That’s interesting. I definitely like the rawness of grunge, so that makes sense, but it’s a tough question. I’ve always just described my music as “electronic music with beats,” which is a bit dry and not even accurate because a lot of my music is not with beats, and a lot of unreleased stuff is not even electronic. So I don’t really know how to describe it. As Autechre once said in an interview they just call their music “Autechre music.” So I’m just gonna copy them and say it’s “Eomac music.”